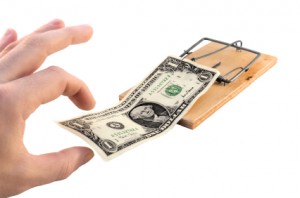 I’ve probably offended you. How can your site be bad, when you’ve spent so much time and massive amounts of resources to make it the most beautiful site on the planet? My intention is not to offend, but to rattle. To shake up your beliefs about how to survive in the Great Recession. You may have a pretty site, but it can be better (much better) from a profit point of view.

I find it interesting how we humans blame shift: “I’m Fat” – It’s the fault of the fast food restaurants and junk food companies. “I am in debt” – It’s the credit card company. “I’m going into foreclosure” – It’s the mortgage lenders fault. “We’re getting a divorce” – It’s my wife’s fault, I’m the perfect husband.

And now I see companies blaming the economy on their website’s lousy performance. Bah humbug!

First step to recovery, admit you have a problem. YOU, not the economy. It’s time to own the responsibility, suck it up and say, “It’s my fault, and I need to do something about it.”

Hallelujah! If you have admitted you have a problem, you are on the road to recovery and the potential to massively increasing your profits! Can I get an Amen?!?! 😉

You still think it’s the economy?  One of our clients was having a problem of profit erosion on one of their sites. To be clearer, their site was sinking like the Titanic, just as big, and going down just as fast. Advertising costs were increasing (we’re talking 7 figures a month folks, not mom-and-pop pay-per-click pocket change), and site conversion rates were going down the toilet. Sound familiar?

They also realized that they needed a fix, and fast. They decided they didn’t have enough internal resources to do the job, nor the expertise to turn it around quickly and grow it. By using our services, they knew they were guaranteed a least a 15% increase or they wouldn’t pay a dime. For them, a 15% increase would not only save the campaign, it would totally make it a cash cow.

They asked us to take it over for them and focus on one landing page.  We did.We started in record time. They understood that they would only pay us if they saw an increase, and they only pay on a modest percentage of that increase.

Of course they had some obstacles and objections at first.  They had pretty much the same objections as every other client we bring on. And of course there were traffic issues, and technical hurdles to overcome, and internal politics to push through and… you get the point. Ultimately they signed, we performed.

Now at 6 months, that client has seen a 43.7% increase in overall conversion. Their gross profits have increased by over 400% from these improvements. And we’re still testing and increasing!

You better believe they are happy they came and admitted they were powerless, had a problem, and asked for help.